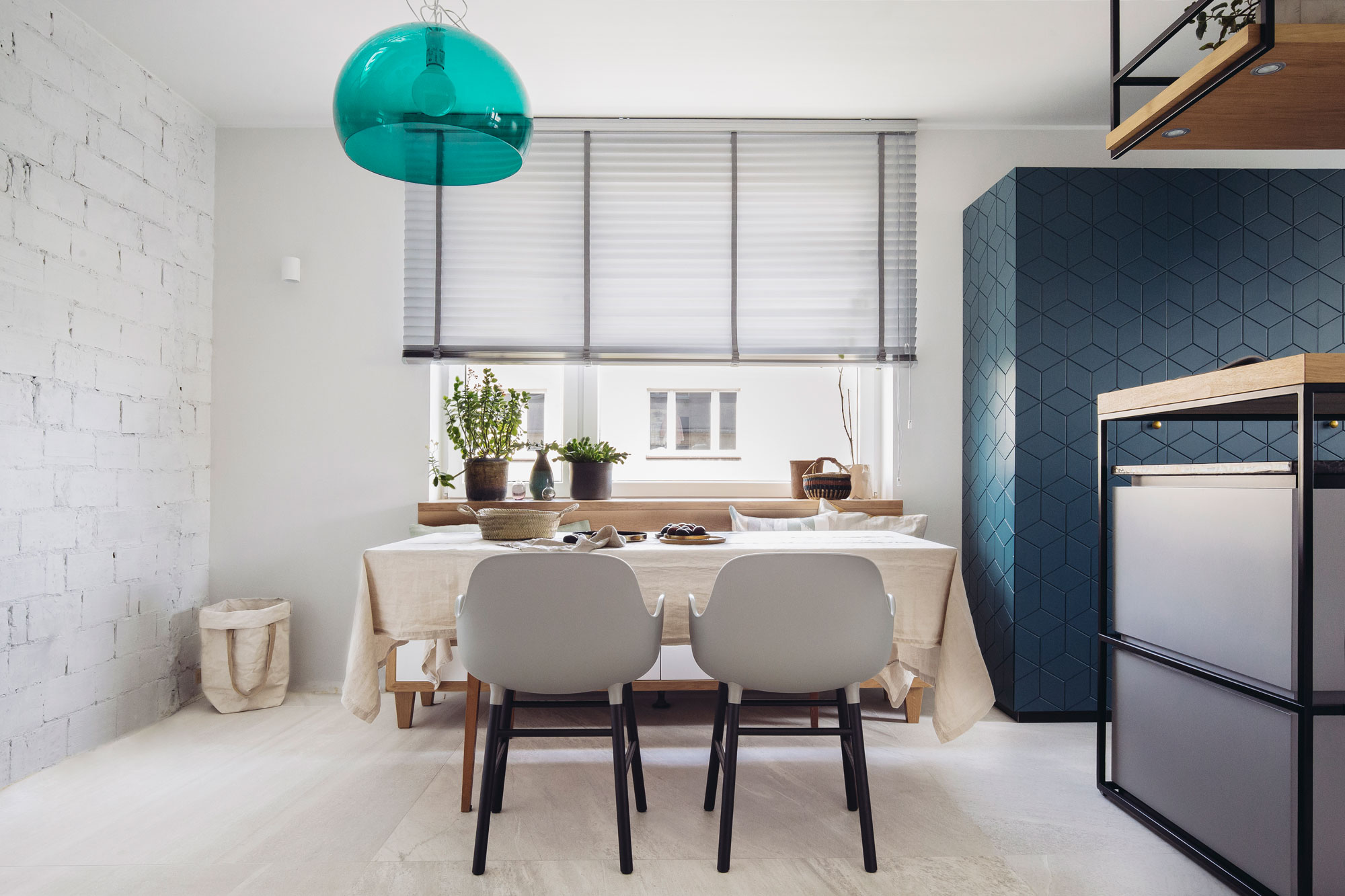 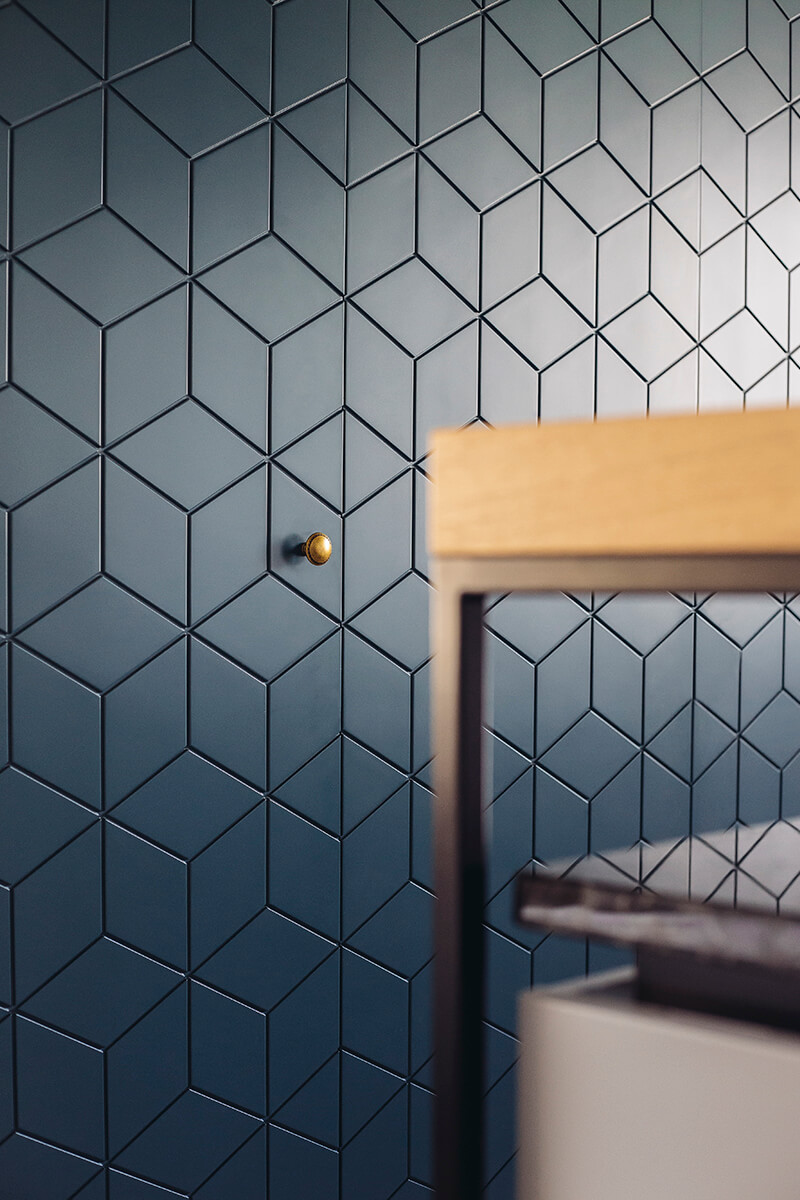 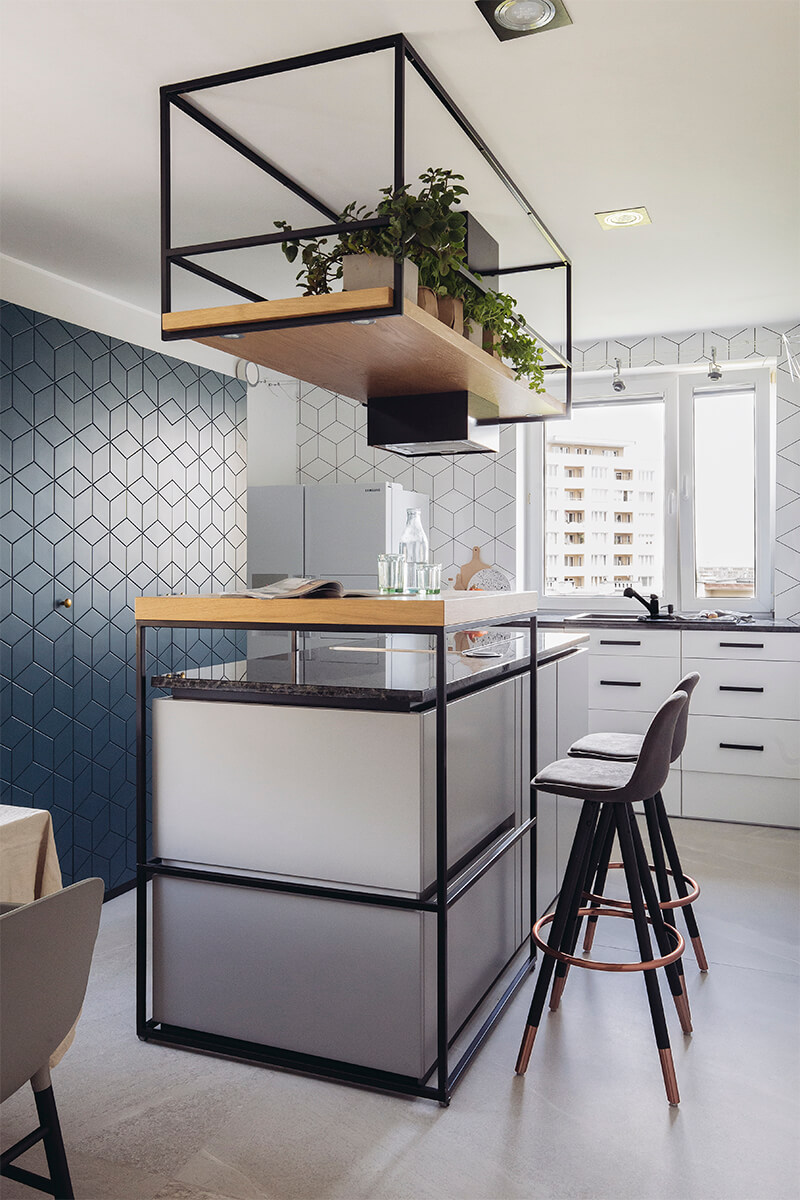 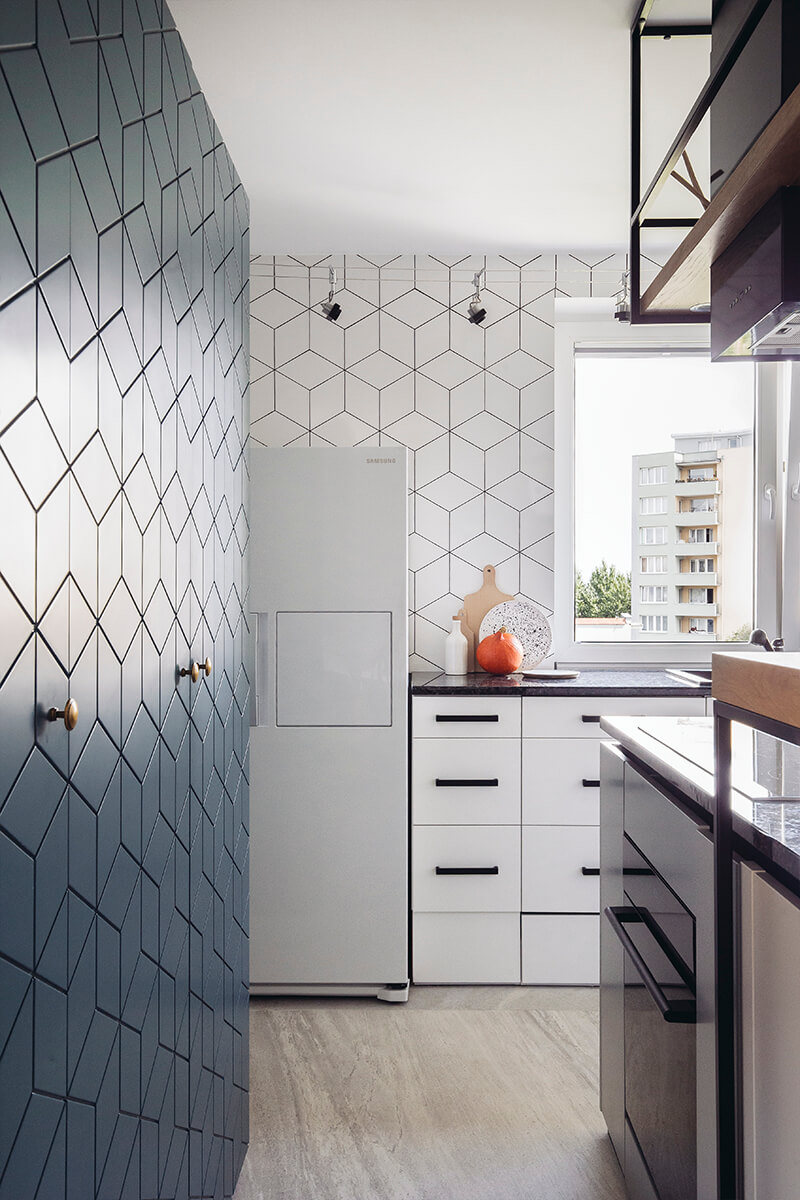 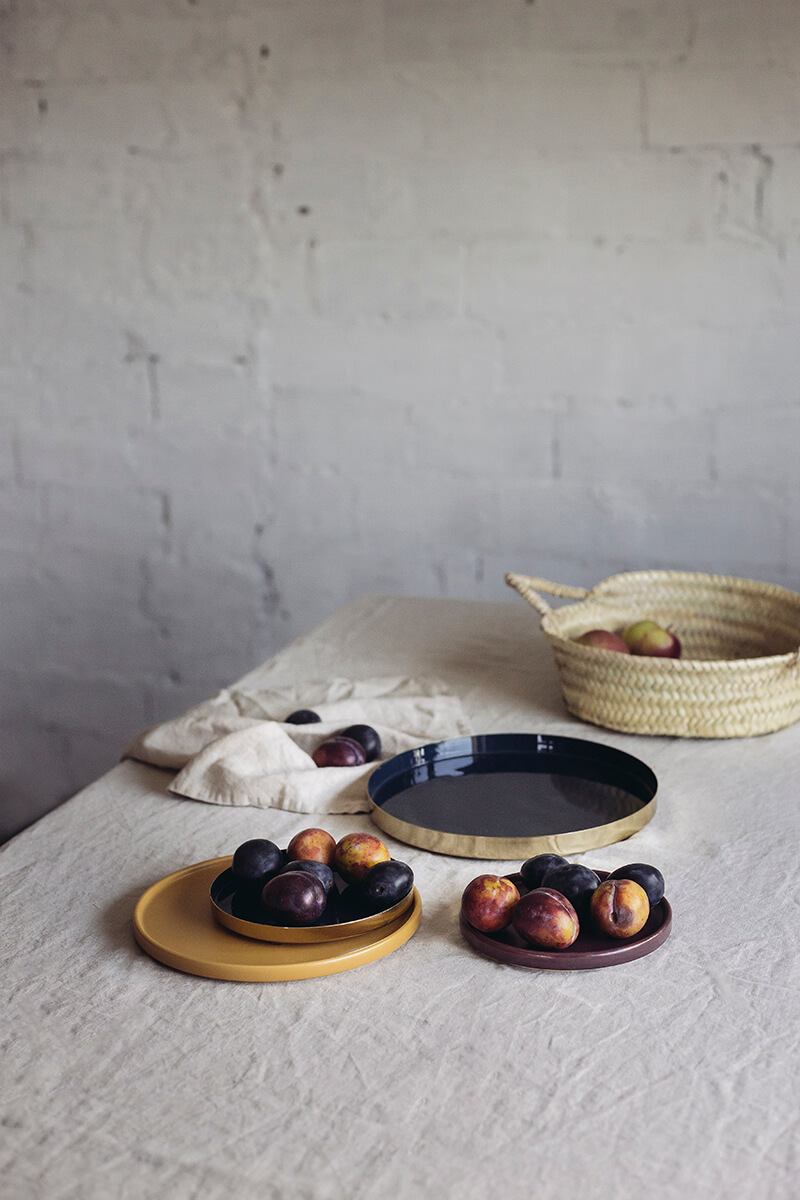 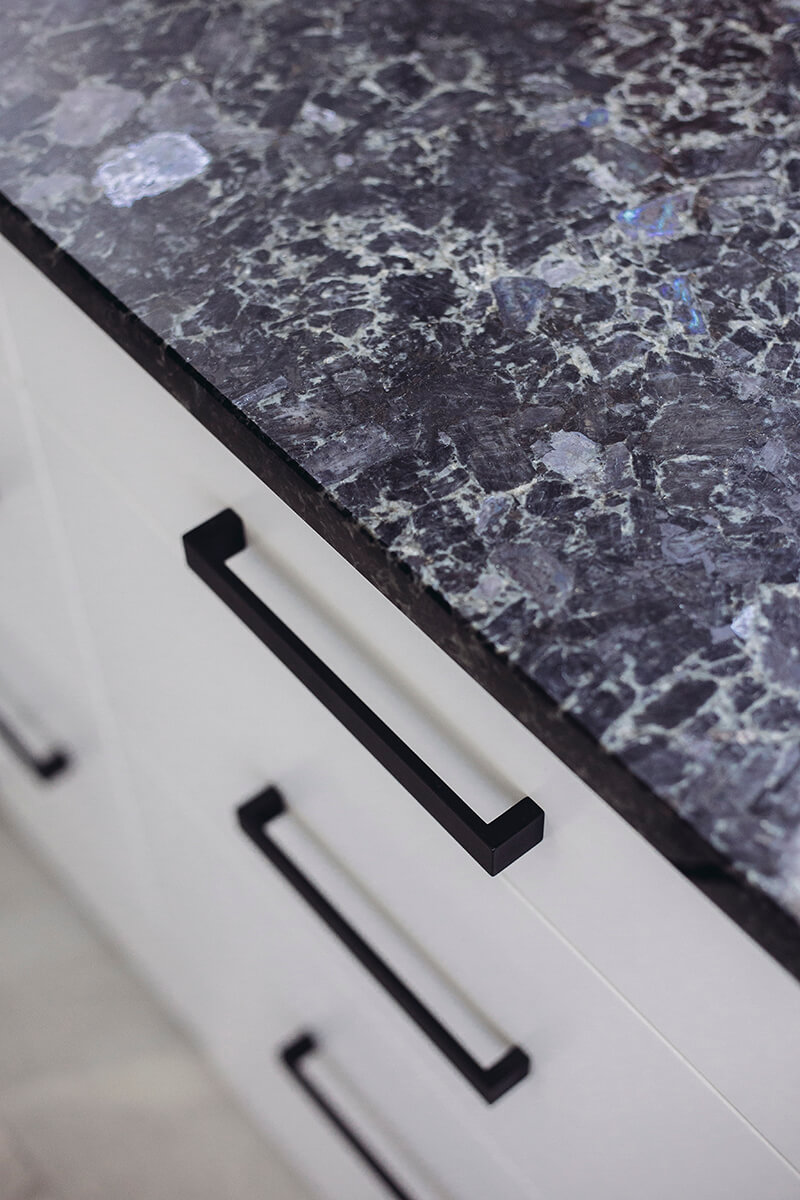 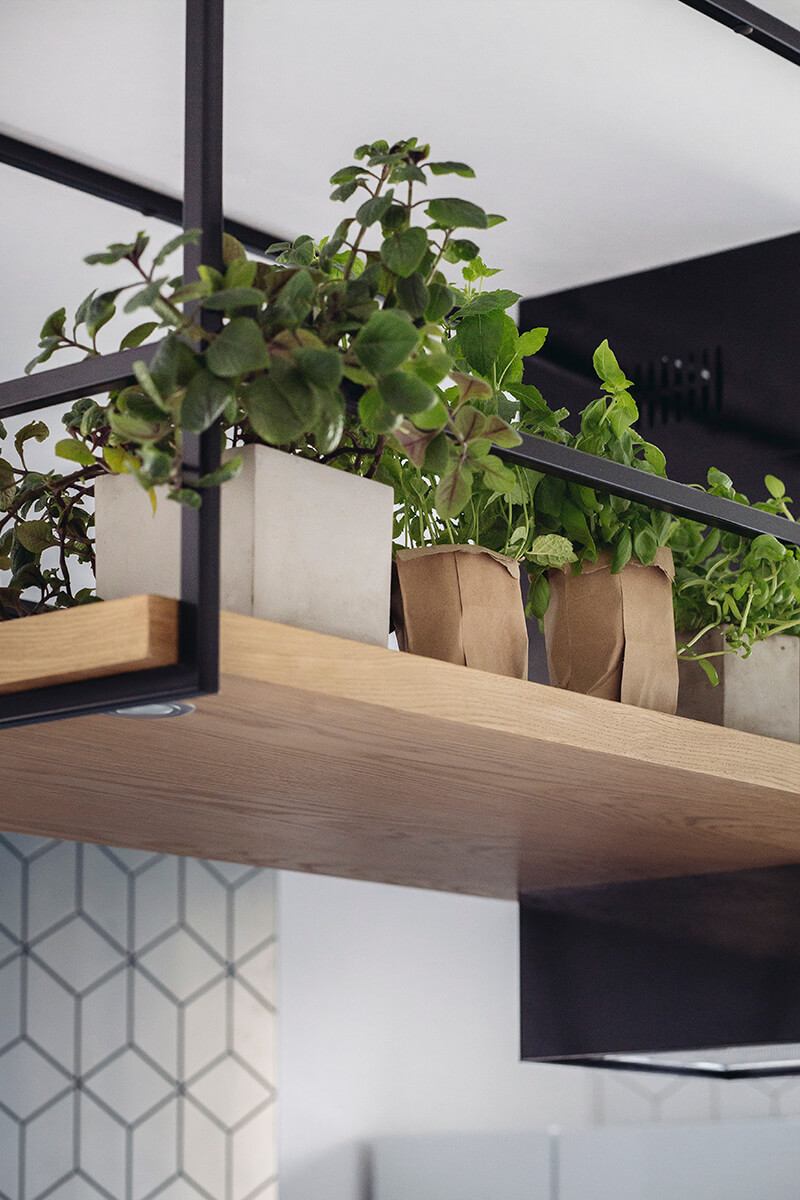 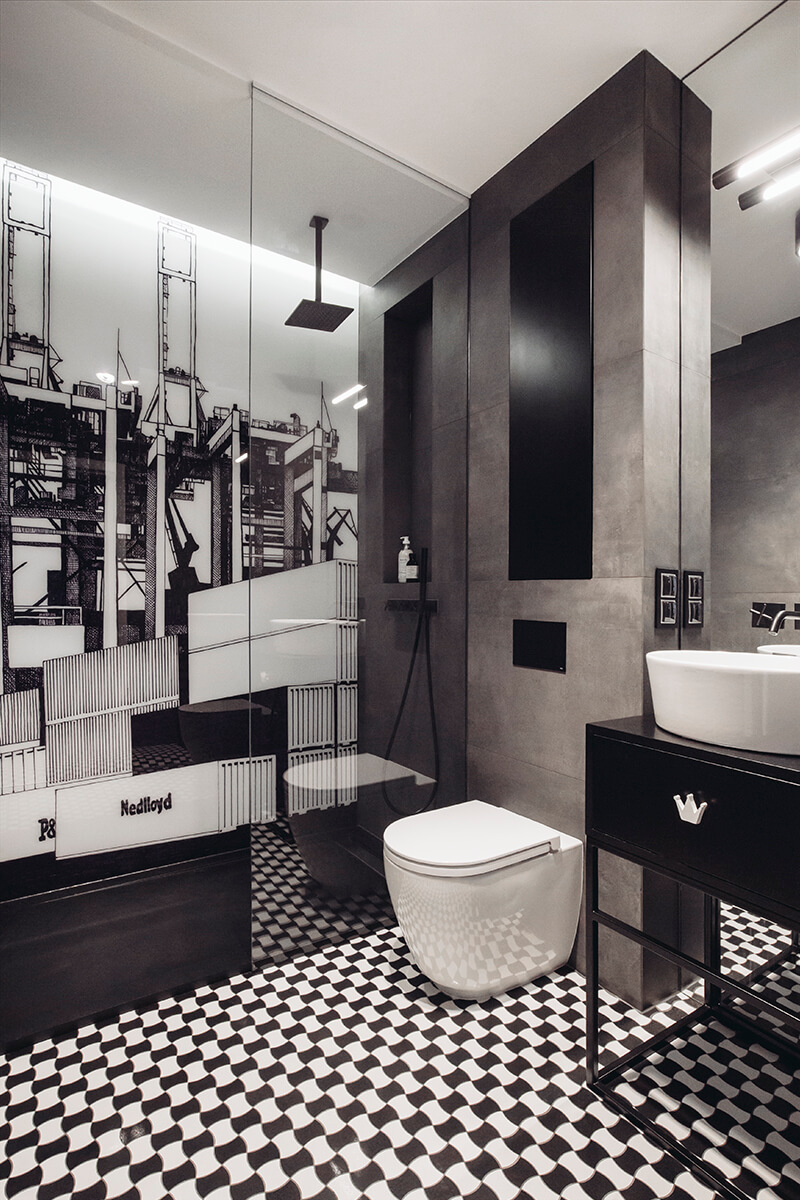 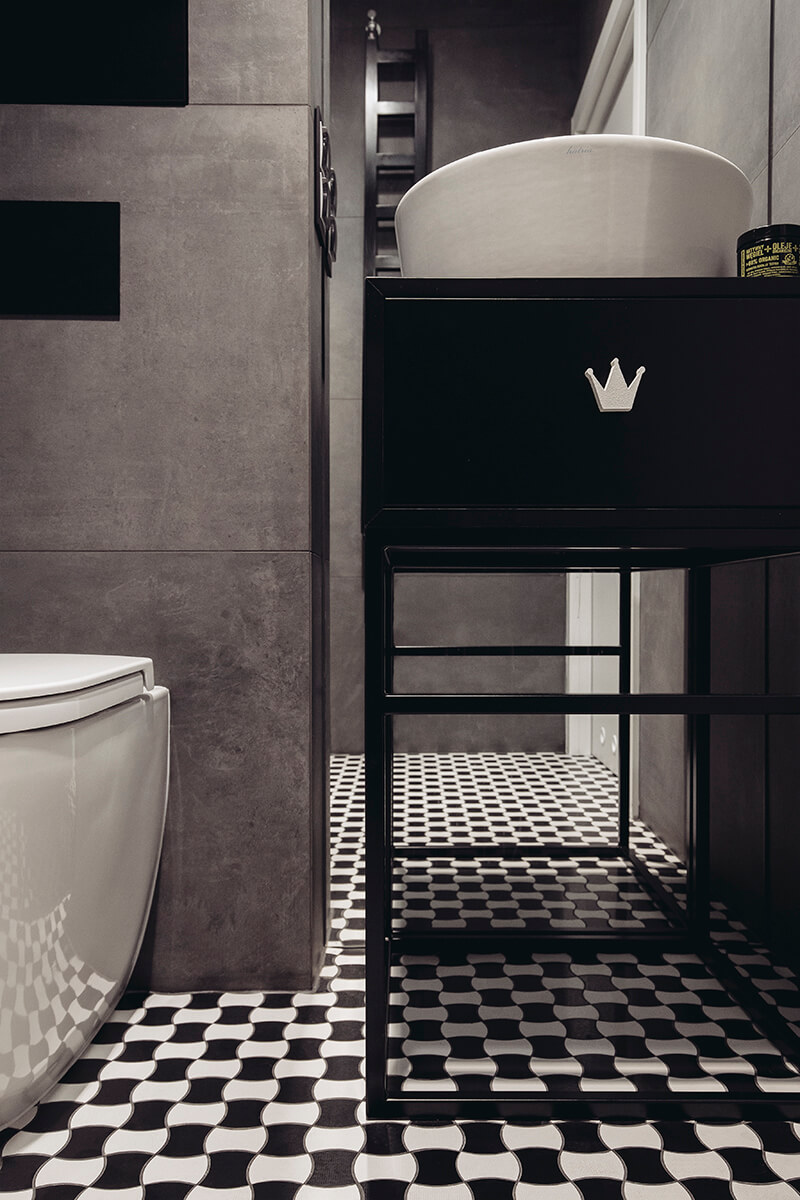 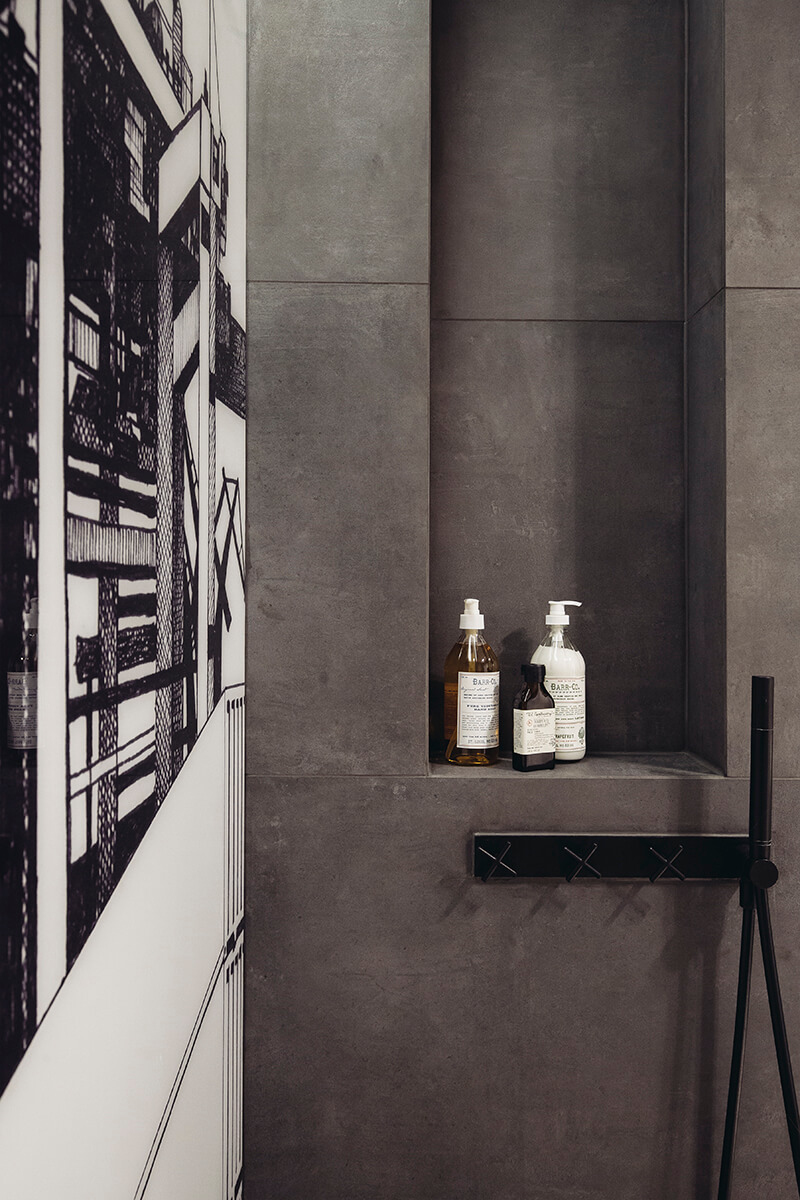 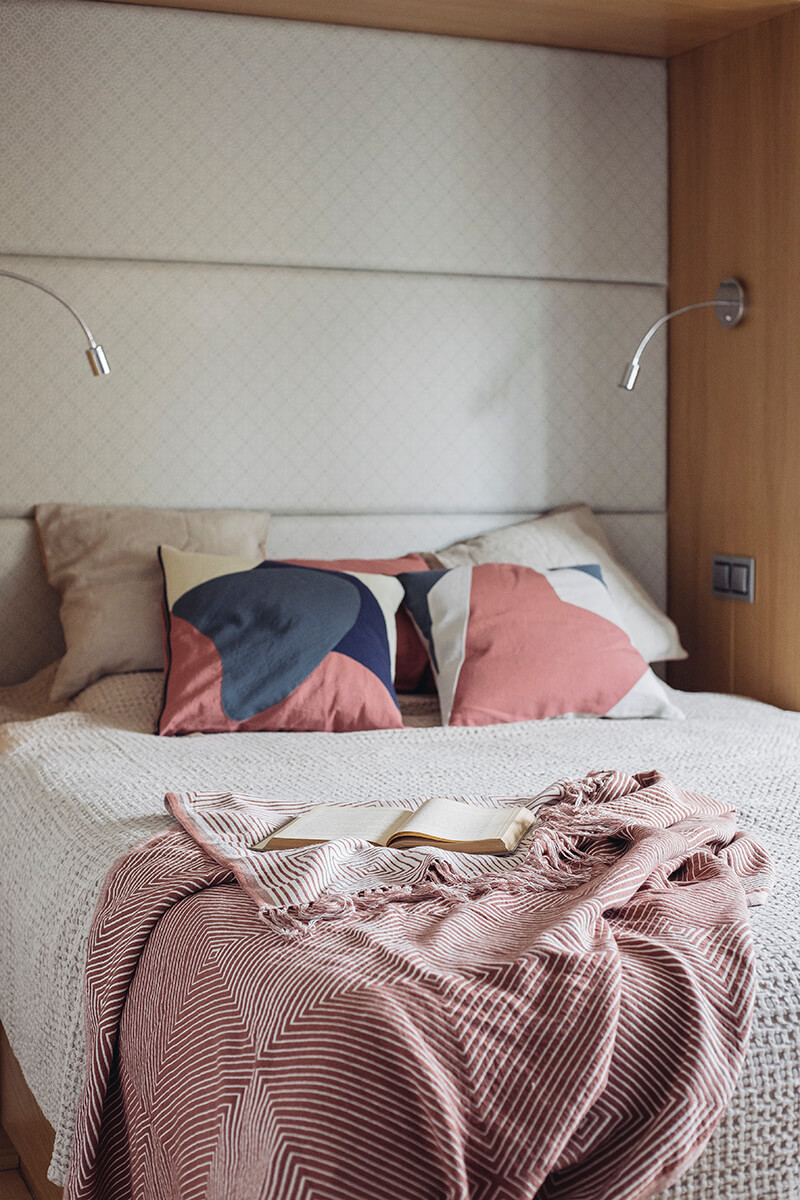 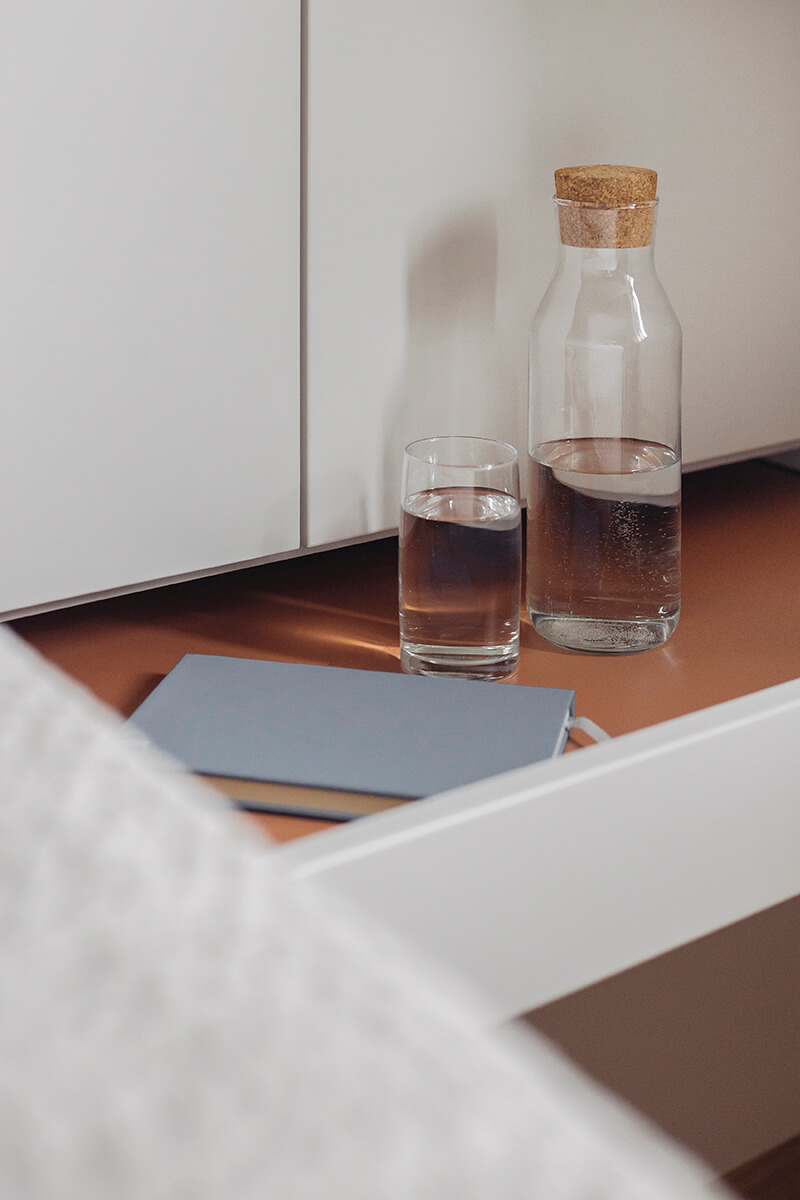 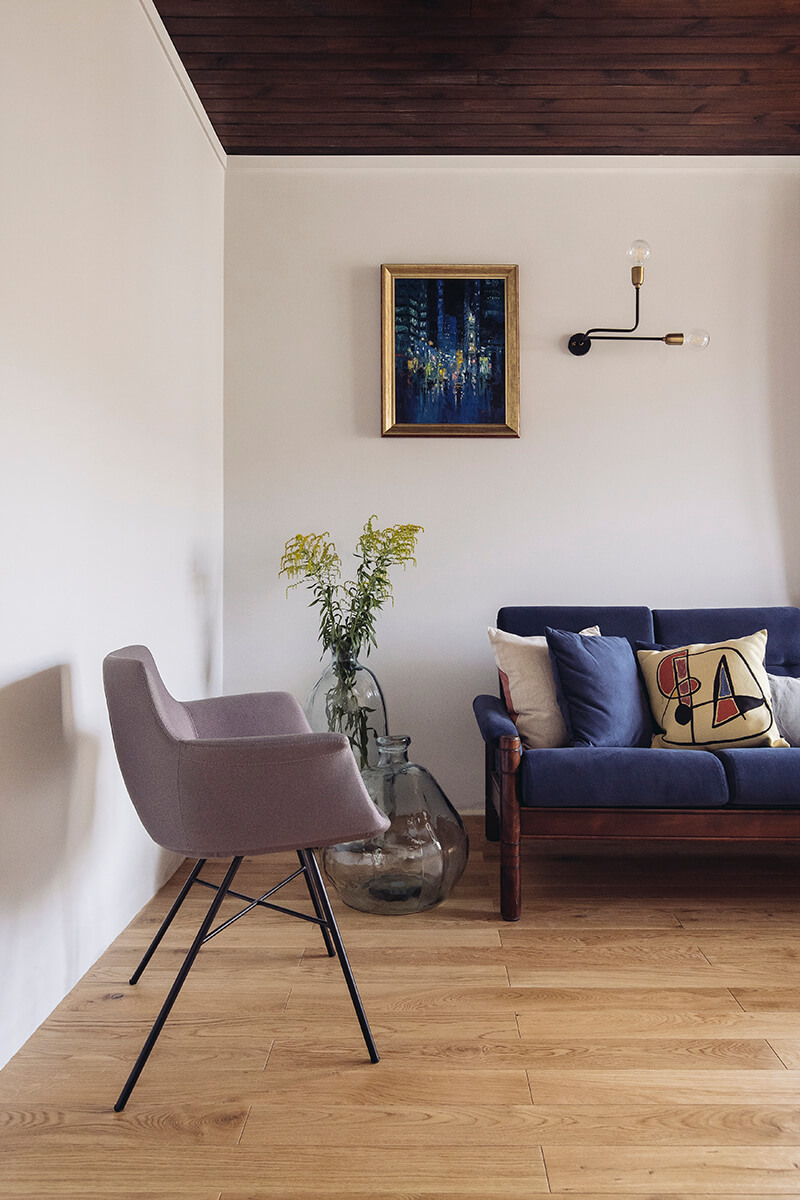 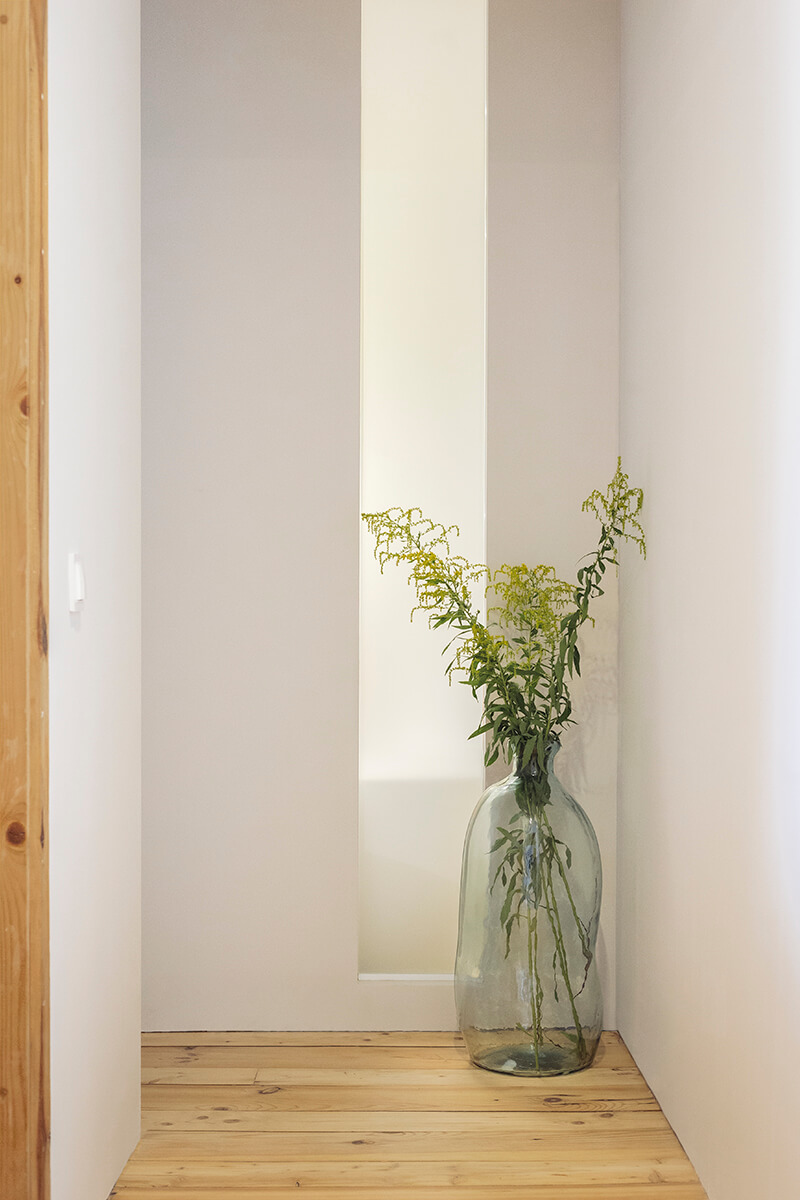 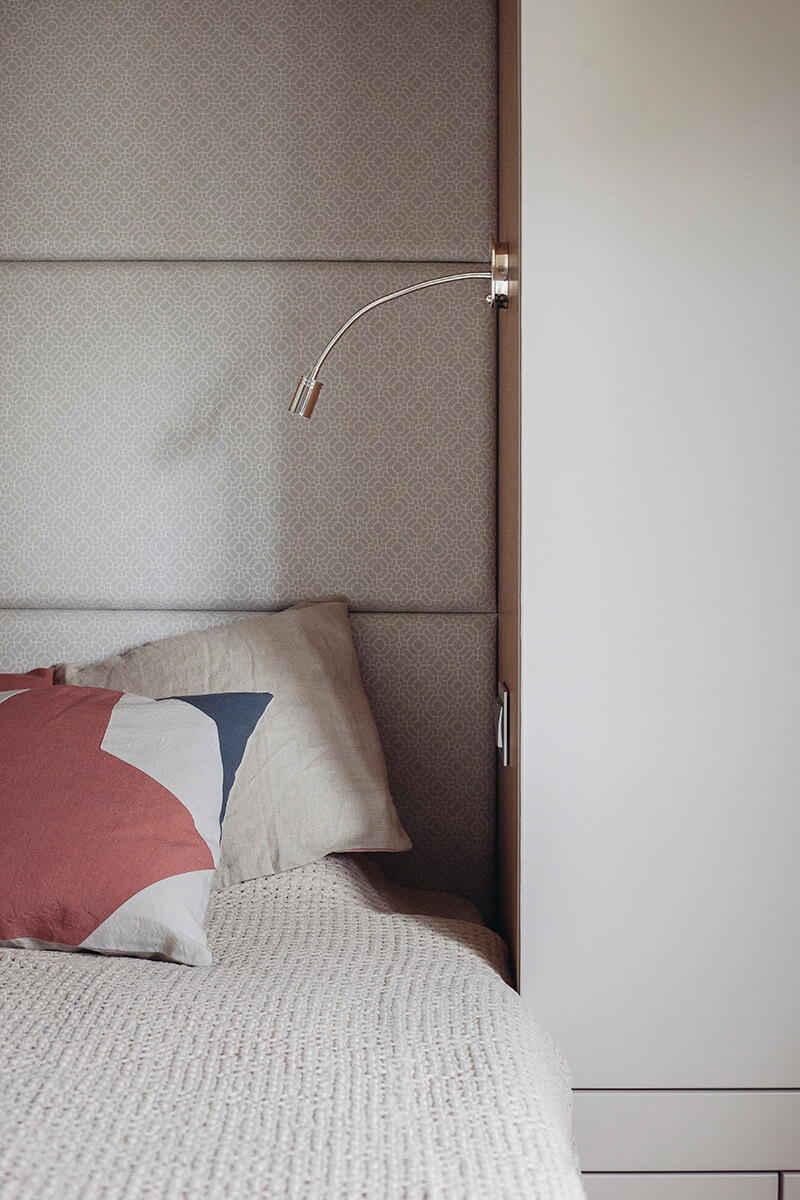 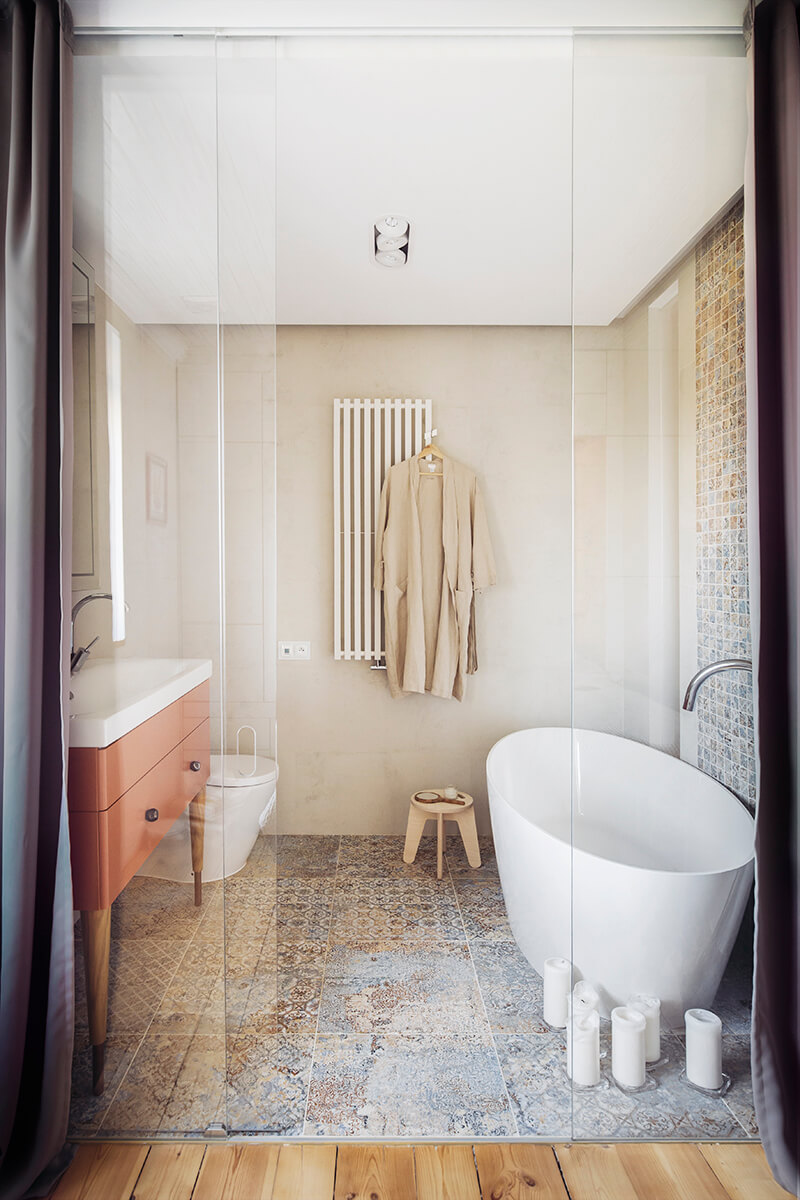 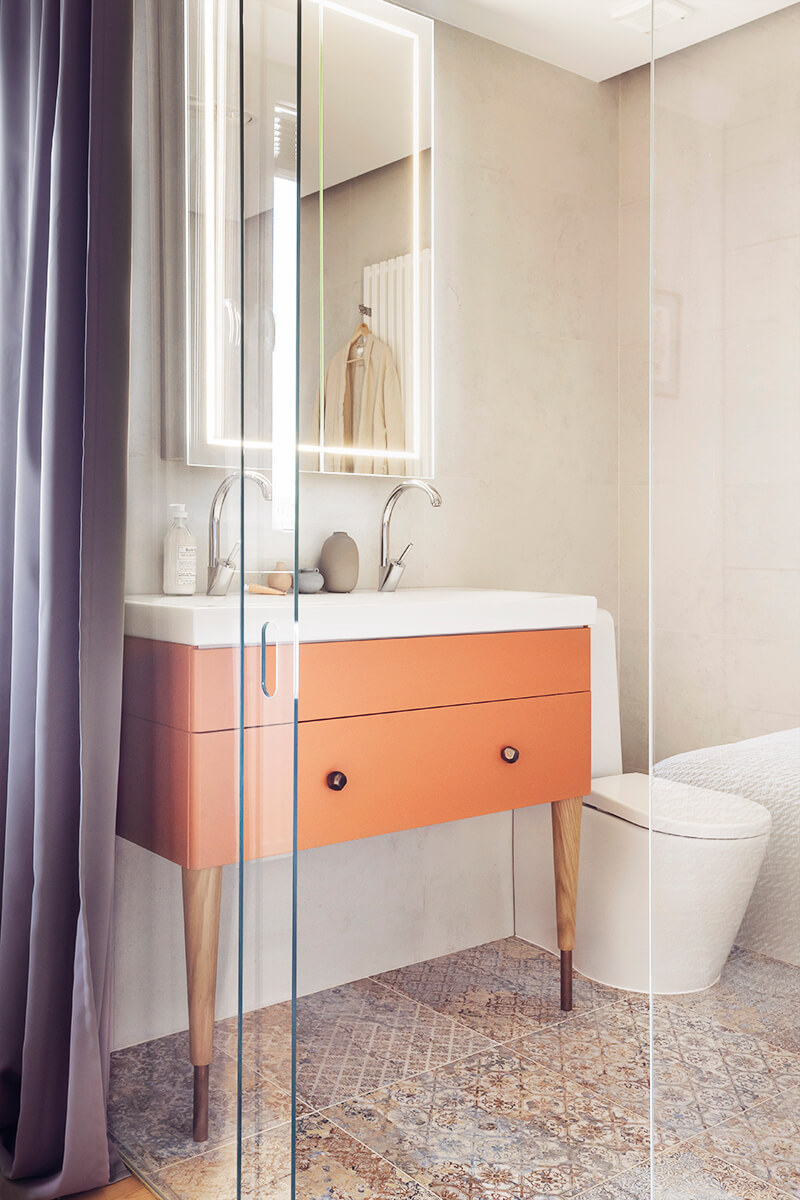 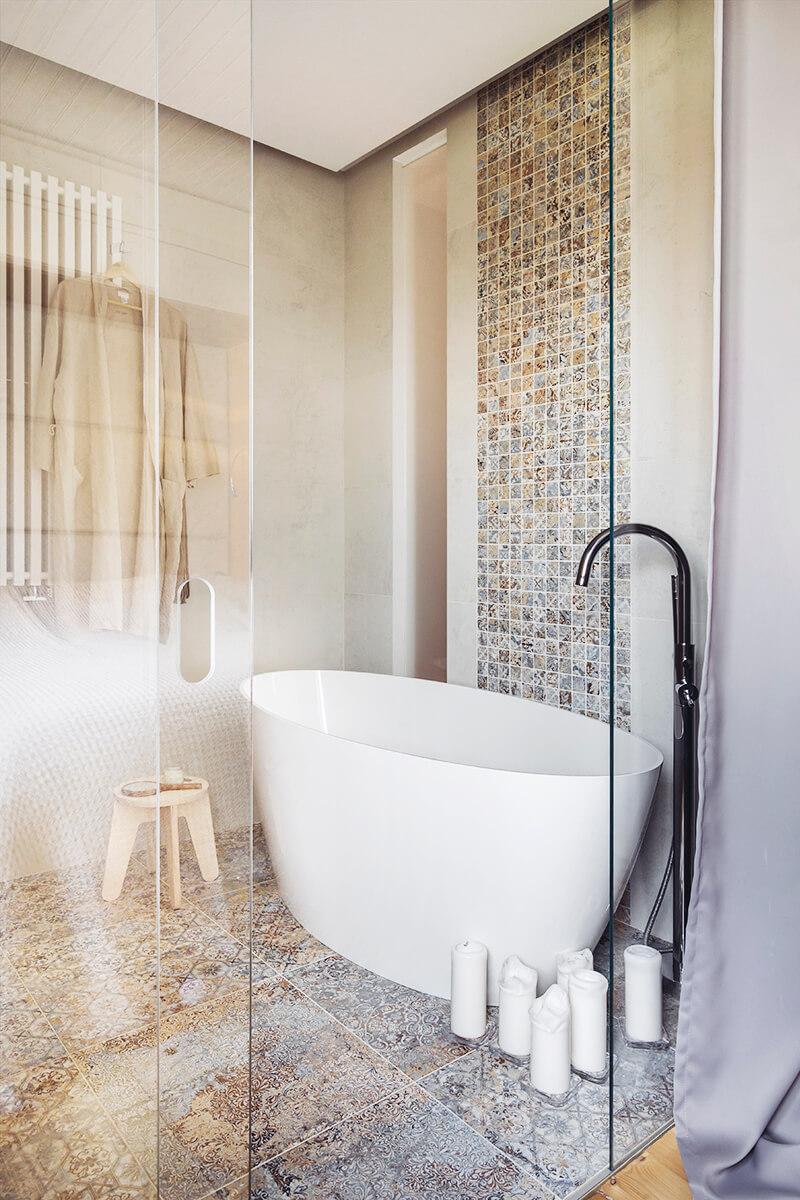 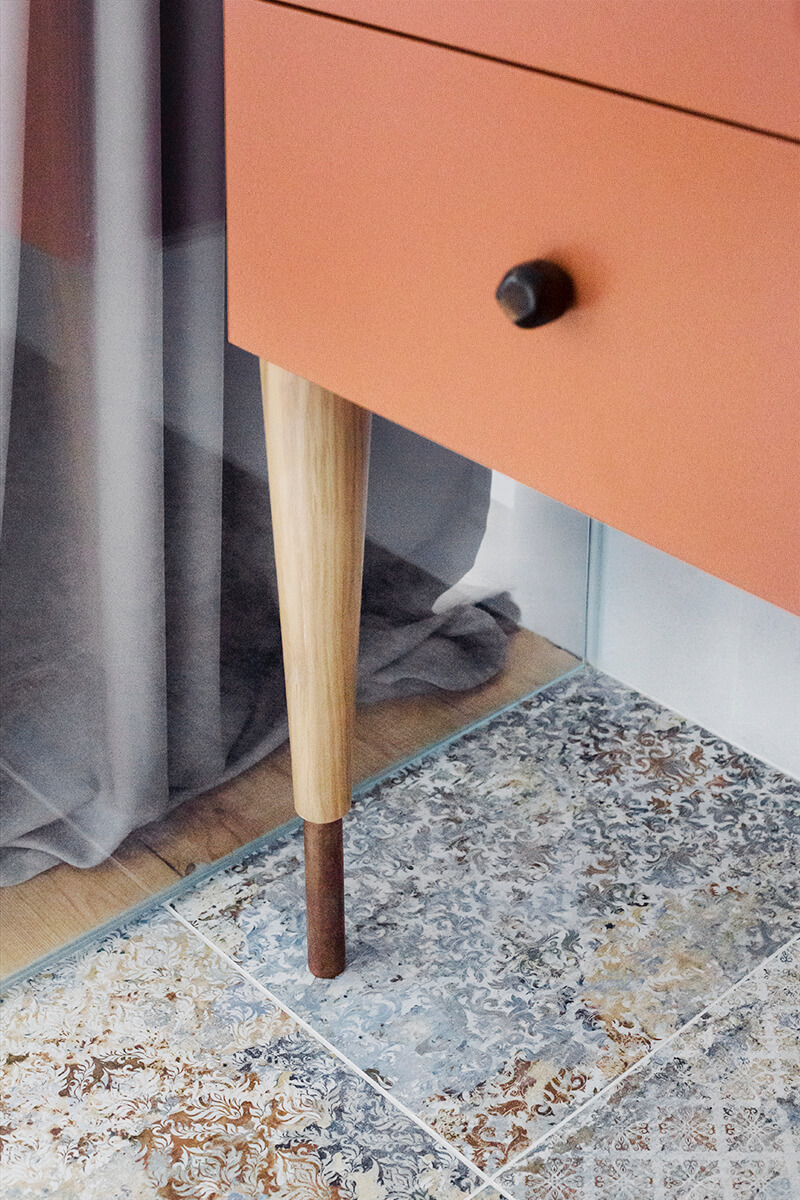 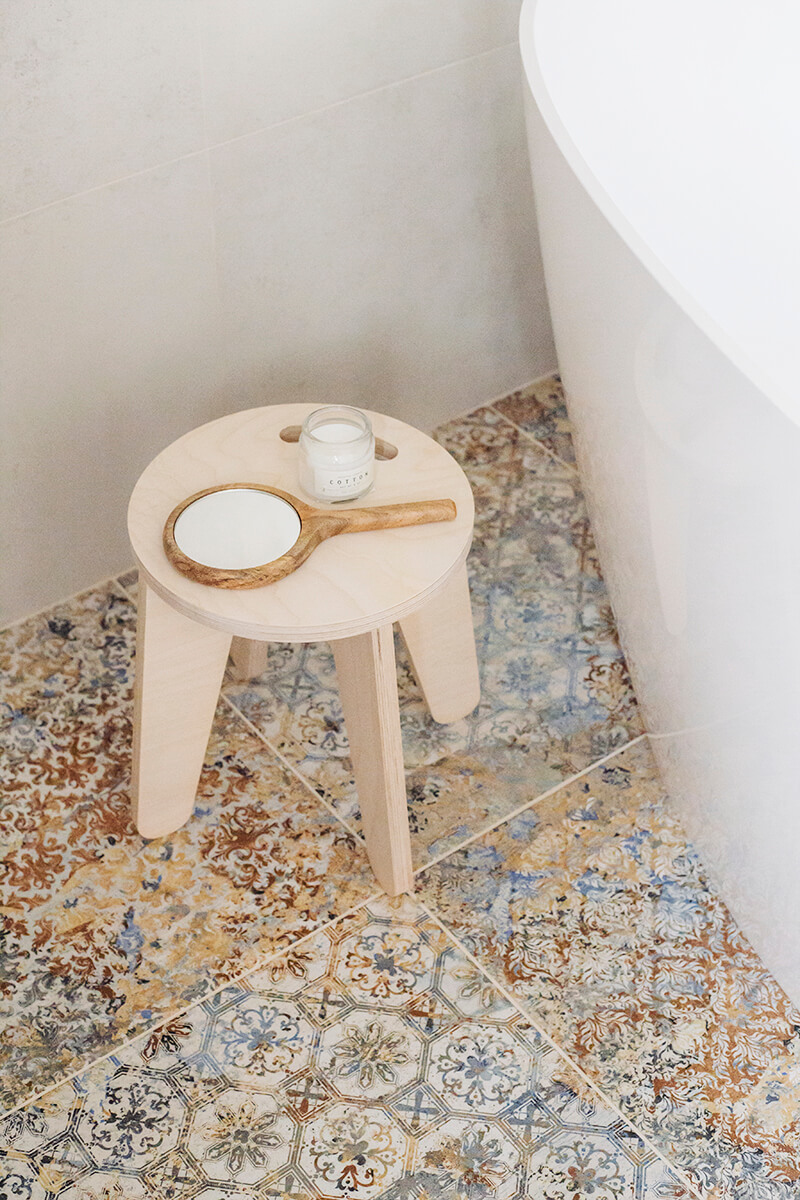 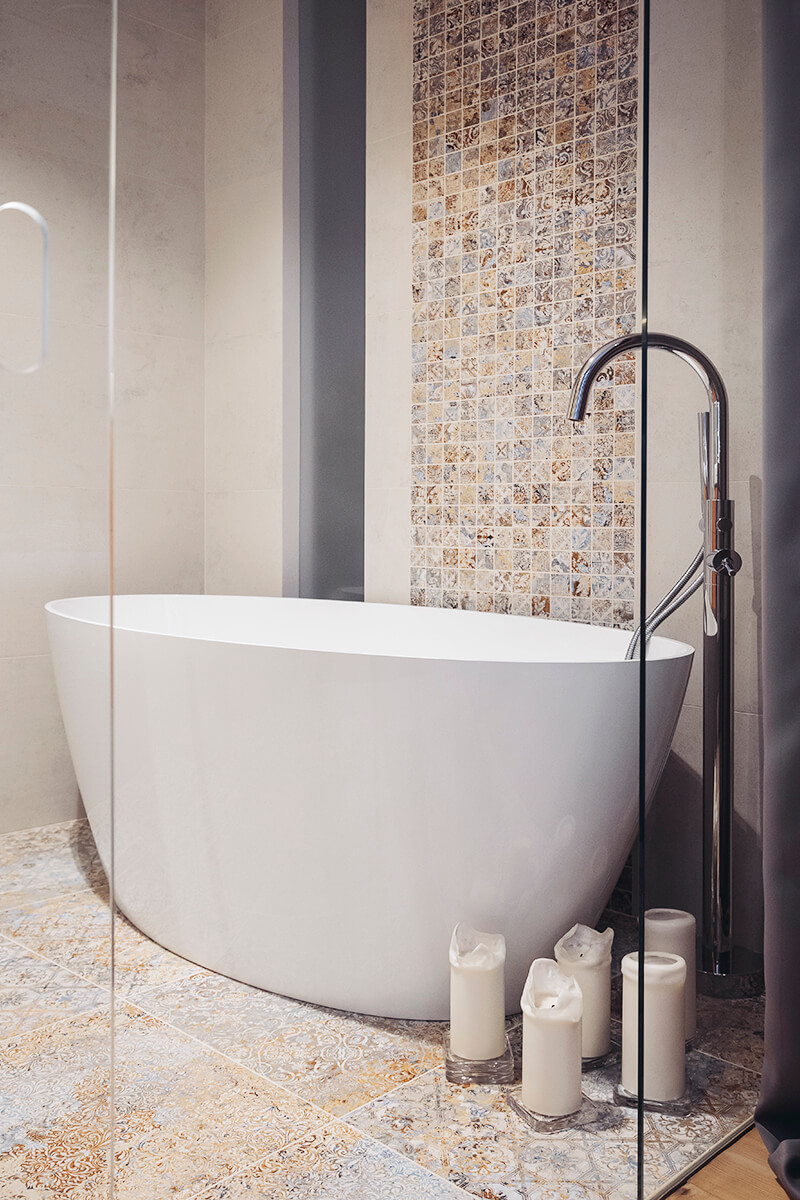 The flat is located on the top floor of one of the tenement houses in Gdynia. It is worth struggling through the four floors of a typical Modernist lastrico (terrazzo) staircase, because they lead to a unique place – spacious and bright, from the windows of which you can see the Hel Peninsula…

Before the final effect was achieved, the repair works lasted almost a year and everything from the walls to the installations and replacement of the windows was actually rebuilt.

Old floors and parquet floors were replaced with an oiled oak floor and large-sized tiles (160 x 160 cm format, and to get them up the stairs of the aforementioned staircase turned out to be a great challenge).

Of the old elements, some wood panelling and wooden ceilings remained – the idea that natural, good material should be respected. It turned out to be a great decision – after painting, the ceilings added uniqueness to the interiors, because now such solutions are practically not used.

An uncovered wall made of blocks, left by a construction team at the end of the works, appealed to investors and after whitening added the industrial climate and authenticity.

The kitchen has been dominated by a large sideboard housing the entire kitchen equipment. It is a unique piece of furniture both in terms of purpose, colour and milled honeycomb structure. The kitchen island has been designed so that after unfolding it is an extra space, which together with a dining table creates a place for a meal for at least 10 people.

Black-looking tops reveal a beautiful structure and reflections of the entire palette of blues, through emeralds to dark green. These colours also appear in a subtle way in the rest of the flat.

Next to the kitchen there is a utility room and a small bathroom which literally refers to the interior of Gdynia’s modernism.

A floor made of black and white Art deco pattern tiles evokes the pre-war charm of detail and creates a very strong, graphic effect, all complemented by grey concrete tiles and black fittings.

The artwork in the shower (made to order) is a shot from the northern part of Gdynia showing the container base which the owner of the apartment is associated with.

In the further part of the apartment there is a room for work, a small bedroom and, above all, the private space of the hosts – a bedroom with a bathroom.

The whole is maintained in subdued beiges and shades of terracotta, the existing wooden ceiling, has been painted white, enhancing the impression of cosiness.

Owing to the bathroom fenced off with glass, the private space of the hosts seems twice as large.

On a daily basis, the curtains are opened and the room fills with the light of the setting sun.

Additional glazing behind the bathtub lets it further in, illuminating the dark corridor.

To further blur the border between the two rooms in the bathroom, large-format tiles with the motif of a traditional Belgian carpet were used.

The whole creates a zone of relaxation.

It was supposed to be an effective space, but also a functional one, therefore the bed is placed in the furniture construction, which is also a wardrobe.

Instead of bedside tables, retractable trays have been designed that have telephone charging sockets in the back.

Most of the beautiful elements and unusual solutions are due to the openness and trust of investors.

They feel good design “under the skin” – when they took pictures, they showed glasses saved from being thrown away by the neighbours.

After closer inspection it turned out to be a true rarity – they were glass designs by Zbigniew Horbowy from the Sudety glass factory!